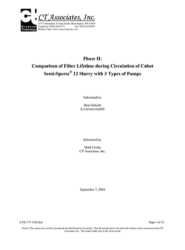 Phase II: Comparison of Filter Lifetime during Circulation of Cabot Semi-Sperse® 12 Slurry with 3 Types of Pumps

Facts
In a previous test, the concentration of large particles of CMP slurry tends to increase in bellows and diaphragm pumps, whereas no increase was observed with a Levitronix® pump.
Large particles can lead to filter clogging, which results in a decreased filter lifetime.

Test conditions
A Levitronix® BPS-4 pump, a diaphragm pump, and a bellows pump were evaluated for their effect on filter lifetime. Each pump was used to circulate approximately 28.5 liters of Cabot Semi-Sperse® 12 slurry at a flow rate of approximately 29.5 lpm (7.8 gpm). A 10” Mykrolis Planargard® CMP3 filter was installed downstream of each pump. The pressure drop across each filter, representing a correlate of filter lifetime, was monitored and compared. The tests were continued until the pressure drop across the filter increased by at least 10 psig or more than 10,000 turnovers were achieved.

Increase in ∆P across each filter for all 3 pump tests

Author Marc Litchy
Company CT Associates
Document Number LTX 775 1020
Pages 12
We use cookies on our website to give you the most relevant experience by remembering your preferences and repeat visits. By clicking “Accept”, you consent to the use of ALL the cookies.
REJECT ACCEPT
Manage consent