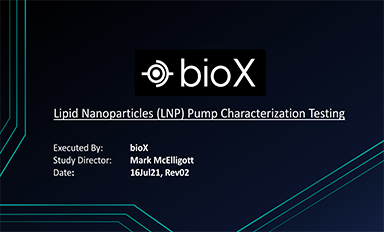 In gene therapy manufacturing, Lipid Nanoparticles (LNPs) require gentle processing that protects the encapsulated mRNA/DNA from degradation. Pump induced shear stress can break down LNPs, resulting in a reduced mRNA encapsulation.
In comparison to a Levitronix® pump, a 4-Piston Diaphragm Pump consists of multiple valves that restrict fluid motion to the desired direction. Valve interaction can lead to shear stress, which can result in damaged Lipid Nanoparticles (LNPs).

Test conditions
The Levitronix® PuraLev® 2000SU and a 4-Piston Diaphragm pump of corresponding hydraulic power were compared by observing their effect evaluated for stress created and its effect on LNP quality, namely average particle size, polydispersity index and mRNA encapsulation. A fixed volume of LNP suspension was pumped in two identical closed-loop configurations. The flow rate of each pump was set to 23 and 50 lpm, and backpressures of 30 and 45 psi, respectively. Average LNP size, dispersity index and mRNA encapsulation were measured at selected times and compared.

Results
Average LNP size, dispersity index and mRNA encapsulation did not change with the PuraLev® 2000SU during the entire test. In contrast, the 4‐piston diaphragm pump had a significant impact on all three LNP parameters.

This website uses cookies to improve your experience while you navigate through the website. Out of these, the cookies that are categorized as necessary are stored on your browser as they are essential for the working of basic functionalities of the website. We also use third-party cookies that help us analyze and understand how you use this website. These cookies will be stored in your browser only with your consent. You also have the option to opt-out of these cookies. But opting out of some of these cookies may affect your browsing experience.
SAVE & ACCEPT